But what's really interesting is the name of his publicist.

If I ever need a publicist, I sure hope I can get a Bragman (or Bragwoman). 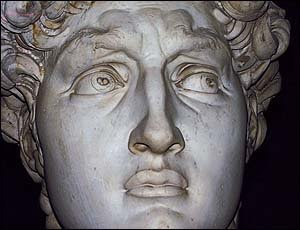 The same worried look, perhaps because both were concerned they were over-matched by the job at hand?

Plenty of Time to Catch Up on Thinking When You're Dead

Some of Burris' supporters have bemoaned the fact that Democrats would stand in the way of the Senate gaining its only black member. Burris himself downplayed the issue of race, telling reporters: "I cannot control my supporters. I have never in my life, in all my years of being elected to office, thought anything about race." (Emphasis added.)

Burris already has a granite mausoleum erected under the heading "TRAIL BLAZER," followed by his achievement as "First African-American in Illinois to Become", the Chicago Tribune reports.

To be clear, while (like many) I think Burris has come off as a self-satisfied blowhard, that is not to say I think Burris should not be seated. To the contrary, my tentative view is that, while Akhil Amar has put forth a fairly persuasive (though hardly certain) argument that the Senate has the unreviewable power to refuse to seat Burris, for the Senate to exercise that power here, where there is no evidence of a corrupt bargain between Blagojevich and Burris, would be an abuse of that power and set a bad precedent for the future. Better to let Burris be seated and schedule a special election to replace him posthaste, which the Illinois Legislature retains the power to do under the Seventeenth Amendment.

Logic said this might happen, and via Melissa McEwan, it has:

The knuckleball — the fluttering, hard-to-hit pitch that's rare in the major leagues — is propelling a 16-year-old girl to the pros in Japan.

Eri Yoshida was inspired to learn how to throw the knuckler after seeing a video of Boston Red Sox pitcher Tim Wakefield. On Monday, she broke the gender barrier by being drafted for an independent league team as Japan's first female professional baseball player.

And a classy response from the Red Sox' Tim Wakefield:

"It's funny that I've reached that point in my career that people want to emulate me," Wakefield said. "I'm glad I had people like the Niekros, Charlie Hough and Tom Candiotti that I could look up to. I am deeply humbled that it is me this time."

…"Hope I can see her pitch one day," Wakefield said in a message he texted to the Red Sox that was relayed to The Associated Press. "I'm honored that someone wants to become me. I wish her the best of luck. Maybe I can learn something from her."

This blog will now return to its usual practice of not praising members of the Red Sox under any circumstances.

Getting Under Joe's Skin?

When I first saw this news on TPM:

... I was cranky, because I've been just dying to see Traitor Joe ridden out of town on a rail, frog-marched out of the caucus, tarred and feathered, etc.

But then I got thinking some more... and I think this may be another absolutely brilliant move on Obama's part.

Why brilliant, you ask?

Well, because it makes Obama a bigger guy than Lieberman. Lieberman, clearly, DOES hold grudges--which is a big part of what's gotten him where he is today. At the same time, Lieberman is, as we've said a thousand times, a sanctimonious son of a bitch who likes to think he's better than everyone else. But this clearly indicates that he's NOT better than Barack Obama.

Seriously, this is like some of those other really sly ways that Obama has managed to drive certain people (like Bill Clinton) absolutely batshit crazy without ever saying anything that anyone else would interpret as a bad thing to have said.

Maybe I'm reading too much into it. But I think Joe was angling to be deprived of his committee chairmanship and kicked out of the caucus so he could once again blame the Democrats, talk about how the party has left him, and play the martyr. This deprives him of that opportunity. How does he keep his head from exploding if Barack Obama is a better man than he?

For a cool million, the Obama campaign convinces Fox to ask Major League Baseball to move back the start time of Game 6 of the World Series. And the very Republican MLB agrees.

Via Josh Marshall, the McCain campaign is complaining that debate moderator will have stacked the deck against Sarah Palin if it asks more, or even an equal number of, questions concerning foreign policy, as that area is perceived as Joe Biden's strength and (one of) Sarah Palin's weaknesses.

Frankly, I would be shocked if -- in the current environment, when a third of the first Presidential debate was converted from foreign to domestic policy -- Ifill asks more than half of her questions about foreign policy. She will probably ask less. But if she does ask half, McCain has no reason to complain. Both campaigns agreed to Ifill, knowing full well that when she moderated the last (Cheney-Edwards) VP debate she split her questions almost exactly equally between foreign and domestic issues. Based on word count, excluding Ifill's opening remarks and the candidates' closing statements, the debate was 51.2% on domestic matters and 48.8% on foreign policy.

That said, if the McCain campaign is hoping for a focus on domestic issues, you have to assume they are not looking forward to Thursday night.